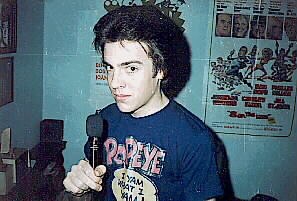 Started in 1983 and been on and off since 1991, this line had the best sound next to Dual Phase who made the first of its machines, maker of "Mack Sound"..
I built two machines for this line which worked better than I thought.  It had an 8 track intro tape.

The comments were about movies that people saw playing in the local theaters.  Paul was able to get commercials from the movie studios to place on his weekly recordings.  As a filler Paul made his own original content with his multi-track and a few of his talented friends.  His stuff was funny and entertaining.  His work on spoof like recordings I think was good enough to be on Doctor Demento.  Especially the spoof on Michael Jackson's Thriller that he made with Nino from "Telephun".  This is one of the best lines in original content.  One day Paul found out from one of his friends that Michael Jackson was going to be doing some shopping in the store his friend worked at.  He got there on time and gave Michael the master copy of the recording spoof he made called "Diller".  Paul is now known as "The Diller Man".

Another one of his movies, "The Visitant" (1981) was shown several times on the pay TV channel "ONTV".  One of the showings was after the showing of "Rocky 3", during prime time.  I think I still have a tape of the broadcast.

In his spare time (and his movie making friends time) he makes movies to show his many talents.  All of his movies that I have seen are of the unknown type.  He should be directing for X-Files or something like the Outer Limits.

Paul has been a guest host on many of the lines:

Here is the
Unofficial Paul Mack
The Moviemaker Page

The pages lists all of his movies since 1979,
with pictures from behind the scenes.

Table ahead. Each cell contains the description of the one tape. The link to the recordings are at the end of the cell. There can be from one to upto four parts roughly 15-minutes each part.

This is the first song that Paul made. This one was the easiest and took the shortest time to make

I would say that this is the best of all of the recordings Paul has been involved with. This is the spoof on Michael Jackson's "Thriller".

I Want To Be A Line Host

An intro to clips from past Movieline tapes.

The long version of the PicturePhone Theme.

The first intro used for PicturePhone. Using a selection from the Carl Stallings Project CD. He made music for Warner Brothers cartoons.

A recording made for Bob Observatory's line.

From tape #136, "The MACKIE AWARDS", showing that Paul is not a sore loser.

A recording made for Bryan W. Feedback's line.
Thanks to REC

Paul Goofs Up The Intro....

From tape #12, Paul has over Dave Burbank, Tony from North Hollywood and his brother. They all try to come up with the best slogan for the line. Paul thinks he has it right but messes it up.

Making Too Much Noise

A continuation of tape #12, Paul is trying to be the center of attention and being crazy in the process. You can hear Dave making these funny comments throwing Paul's funny stuff out of wack. At one point they make too much noise and Paul's step dad walks in complaining about the noise.

Bob Hope On A Talk Show

From tape #17, Paul calls into a talkshow.  Bob Hope is on the Larry King Show. Another obsessive fan.

From tape #17, this was at the beginning of side two of the tape.

From the Dual Phase days of making tapes, this is a spoof of Star Wars.

From tape #24, Paul uses an acting record to produce this skit. Very funny.

From tape #31, Al Bernay explains why people say Goodb... when they hang up the phone.

From tape #32, you hear Sylvester talking with Sonny about the restaurant he just opened.
Sylvester's Voice by Mark Silverman.

From tape #42, Dave tells what Paul does just before he starts making a tape.

Kase from the Valley

From tape #43, Dave Answers live and talks to a real Valley Girl. She could not believe it was Dave & Paul that answered live. She had some movies to review but not the type that Paul would go review.

From tape #59, Bob gives Paul the brush off when Paul calls his home.

From tape #75, Paul Mack & Dennis Decrepo call Bryan to see what he is up to.

From tape #76, a John Travolta sound alike talks about Paul.

From tape #79, Abhoolabroughtdoowalla Dohas Bin (played by Tony North Hollywood) shows off his pet to Paul. He kills it by accident.

From tape #83, Dave thinks that he has just ending the most perfect Movieline tape.  All without Paul.

From tape #89, Paul invited Jim over to make part of the tape. Paul, wanting to be the center of attention is then distracted by the comments made by Jim. You can hear that Paul wants to be the one that is wacky and funny but Jim seems to derail that process.

From tape #90, Jim trying to see if he could get Paul to answer live on the input.

From tape #92, This tape's intro uses the music from the show.

From tape #93, another wacky moment with Paul Mack & Nino Telephun. This time using the Eddie Murphy hit song from back in 1986.

From tape #94, Nino calls "Bob 213" saying that he is from a law firm representing Paul Mack, and that he is suing Bob for not leaving well thought out comments on his line.

Paul Gets The Last Word In

From tape #94, Paul & Nino finnish a section of the tape and Paul wants to get the last word in before it ends.

From tape #97, Jim Clothesline and Paul do this short intro to the Movieline.

From tape #97, Jim was laughing at some of Paul's mistakes.

From tape #100, Jim introduces Paul on his 100th tape anniversary. Not really an anniversary. Paul is having a special on the 101st tape.

The Gang making a tape

This is where they get started on the tape with a little noise and introductions.

Bob says that he has helped Paul by making one of his tapes. Paul sets up the next part of the tape for Nino when things go crazy.

Can't Get Good Help These Days

From Observatory tape #162, Paul calls over his secretary to help him out. It's really his girlfriend (later his wife) and she trys her best to put up with him.

From the intro of the 3rd Year Anniversary Celibration tape #131.

An Interview With Michael the Galactic Hitchhiker

Can't Get To Sleep?

From tape #131, Been pranked by a phoney caller and can't get back to sleep?

From tape #137, Cristy calls the input just to say hello to Paul.

From tape #145, Rich E. Calcom shows how to to stop plagerism. The BOB 213 120-minute Seminar. A full two hours of Bob 213. Talking about American scum to Zygot reruns. Now you too can get rid of these Phone Pirates permanently.

From tape #148, Paul plays some of the recent outtakes. Featuring "Susan Cinema".

From Telephun Caller Collage Tape #129, Paul gets a visit from Rich E. Calcom right in the middle of watching a scary movie. He asks Paul to do a Telephun tape that Rich was suppose to do.

Jim Clothesline Turns Over The Tape

From Telephun Caller Collage tape #129, Jim Clothesline asks for you to help him turn over the tape back to side one.

The 'Has Been' Intro

From tape #148, Paul talks about giving credit where credit is due. It is due to this giant talent, Paul Mack. Winner of a few ARTE Awards and viewed as a GREAT phone celebrity.

John OCC On A Rampage

From tape #148, Paul gets a call from Jim Clothesline, saying that John OCC invited all of the line runners to a party. It gets worse, he is trying to do away with all of them. John came up with an 'original idea', but Jim didn't like it.

From tape #150, Paul being his goofy self desides to intentionally get the callers words wrong, so he can go on a random calling spree.   The caller had been watching the movie "Little Shop Of Horrors" and asked why there was too much 'singing' in it. Paul thought that he would be funny to say the the word was 'sinking'. Paul starts making random calls asking that same questionto whome ever answers the phone.  He then calls Buba Brady from the "Buba Brady Line". Paul trying to be funny and crazy gets thrown off track by this character, saying things like the Buba Brady line is where to go to listen to "On The Air" pornography.

From tape #152, Paul discovers that Rich E. Calcom has a stereo copy of "Line Host".  He calls Dave Burbank to find out how he got it.

From tape #156, starts off with William Wilde. He can't really believe that Paul is doing it again. Then a long and drawn out intro by Dave Burbank explains why Paul is running the line again. Orson does a dramatic intro to Paul. Another one of Williams's intro. Paul does one of his own with the music from a Warner Brothers cartoon. Paul calls up Forest J Ackerman to ask him if he likes PicturePhone or CinemaPhone as the name for Pau's new line.

From tape #156, Paul calls around to ask people what the new name for the new line should be. PicturePhone or CinemaPhone. What works the best. Then Paul does a random puppy. He then calls Michael the Galactic Hitchiker's mother to see what she says about what sounds best. Next is Orson's Corner and his review on a recent movie "Wild At Heart". Last is the song from William Wilde "Mack's Back". time 14:51, the longest of all of the clips.

From tape #157, an intro done by William Wilde.

From tape #159, Jim is the voice of this little kid reading a script. William Wilde finnishes it off with his intro to the tape.

From tape #161, Paul answers live and talks with William Wilde. They reflect on the last disconnection of the line. William talks about the movie he is executive producer, "Shadow Of The Dragon". Most of the people in the film, it's like a 'Who's Who' of the phone world.

From Tape #164, Ken talks about some movies when his mother picks up the phone.

From tape #164, Paul talks with William Wilde explaining to the callers when to leave comments for William and for Paul.

From tape #164, Paul answers live and talks with Mike 'Wolfman Jack' from Granada Hills. They talk about movies and Mike does some of his celebrity imitations.

William Wilde gives the eulogy from the passing of Paul Mack.

Piracy of an artist's work is illegal. Fair use is not.
We have the right to hear, speak, learn, sing, think, and be heard.
No one should assume by default that we're criminals, and the technology we use shouldn't do so either.
We have a right to use technology to shift time and space.

The Fair Use Law
17 U.S.C. 107 (1988 & Supp. IV 1993). Section 107 provides in part:
Notwithstanding the provisions of sections 106 and 106A, the fair use of a copyrighted work, including such use by reproduction in copies or phonerecords or by any other means specified by that section, for purposes such as criticism, comment, news reporting, teaching (including multiple copies for classroom use), scholarship, or research is not an infringement of copyright. In determining whether the use made of a work in any particular case is a fair use the factors to be considered shall include:
1. The purpose and character of the use, including whether such use is of a commercial nature or is for nonprofit educational purposes;
2. The nature of the copyrighted work;
3. The amount and substantiality of the portion used in relation to the copyrighted work as a whole; and
4. The effect of the use upon the potential market for or value of the copyrighted work.